Human Being and Maturity


Ayatollah Tehrani presents this exquisite gift to the Baha'is of the world, particularly to the Baha'is of Iran, who he says "have suffered in manifold ways as a result of blind religious prejudice." He further states that this act is "an expression of sympathy and care from me and on behalf of all my open-minded fellow citizens."
In response, Ms. Dugal stated: "The Baha'i International Community is deeply touched by this act of high-mindedness and the sentiments of religious tolerance and respect for human dignity that prompted it."http://news.bahai.org/story/987 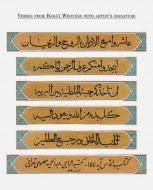 The text reads:1. Consort with all religions with amity and concord2. that they may inhale from you the sweet fragrance of God. Beware lest.....

Ayatollah Tehrani's hope is that this gift "which will be kept by the Universal House of Justice [the international governing body of the Baha'i Faith] will serve as a reminder of the rich and ancient Iranian tradition of friendship and of its culture of coexistence."
Posted by Eman and Yasser at 7:55 PM No comments: