You have written that there is a difference among the believers concerning the 'Second Coming of Christ.' Gracious God! Time and again this question hath arisen, and its answer hath emanated in a clear and irrefutable statement from the pen of `Abdu'l-Bahá, that what is meant in the prophecies by the `Lord of Hosts' and the 'Promised Christ' is the Blessed Perfection (Bahá'u'lláh) ...

On November 28, members of the Baha'i Faith throughout the world commemorate the passing of 'Abdu'l-Baha, the eldest son and successor of Baha'u'llah, 83 years ago.

'Abdu'l-Baha died in His house in Haifa in 1921, aged 77. More than 10,000 mourners, representing every one of the diverse religions and ethnic communities in the Holy Land, attended His funeral.

He was laid to rest in a vault adjoining that in which He had laid the remains of the Bab on Mount Carmel in 1909.

Baha'is observe the Holy Day of the Ascension of 'Abdu'l-Baha at 1:00 a.m.

Posted by Eman and Yasser at 12:24 AM No comments:

Posted by Eman and Yasser at 10:18 PM No comments:

Equality between women and Men in Canada since 1929

An important event happened in Canada back in 1938.
This event, known in Canada as „The Persons Case, was precipitated when Emily Murphy was appointed as a judge in Canada in 1916. Her first day on the bench, she was challenged by lawyers who declared she could not rule as judge because women are not persons in Canada. They were correct.
The first battle was that women had to prove that they had souls. Many supported Mrs. Murphy, and of note are four other women activists from Alberta: Nellie McClung, Irene Parlby, Louise McKinney and Henrietta Muir Edwards. The activists petitioned the Supreme Court of Canada, and were shocked when their appeal was denied. They then took their case to the British Privy Council (the highest ruling court at that time for Canada).
On October 18, 1929 they win their case and women become persons in Canada. Since 1992, the month of October has been dedicated to the history of women in Canada. This year marked the 80th Anniversary of this historic „women become persons event, which was a big step for the establishment of equality between women and men in Canada.
Posted by Eman and Yasser at 9:28 PM No comments:

Email ThisBlogThis!Share to TwitterShare to FacebookShare to Pinterest
Labels: Equality between Women and Men

Nov 25th, the International Day for the Elimination of Violence against Women

" In November every year, we celebrate another important date, as 25 November marks the International Day for the Elimination of Violence against Women. This date is followed by a period of sixteen days of action, ending on 10 December, during which Bahá‟í communities are invited to support the efforts of the many groups and individuals carrying out positive actions for the elimination of the various forms of violence against women and girls. The elimination of violence remains a major concern of the United Nations and of the many national and international organizations working towards the establishment of justice and equity, particularly between women and men."
“Women have equal rights with men upon earth; in religion and society they are a very important element.” Abdu‟l Baha
Posted by Eman and Yasser at 9:48 PM No comments:

Posted by Eman and Yasser at 10:12 PM No comments:

Birth of Baha'u'llah on 12 November

Baha'is celebrate Birth of Baha'u'llah on 12 November,
Baha'is around the globe will celebrate the anniversary of the birth of Baha'u'llah, the founder of the Baha'i Faith. In 1853, He was exiled from His native land to Baghdad, where in 1863 He announced that He was the bearer of a new revelation from God that would bring unity to the peoples of the world. He was later exiled to Acre, in present-day Israel, where He passed away in 1892.
You can not stop the light, its shinning is so bright.......................

Email ThisBlogThis!Share to TwitterShare to FacebookShare to Pinterest
Labels: Baha'is

Muhammad was the first Adam

...hath not Muhammad, Himself, declared: I am all the Prophets? Hath He not said as We have already mentioned: "I am Adam, Noah, Moses, and Jesus"? Why should Mohammad, that immortal Beauty, Who hath said: I am the first Adam" be incapable of saying also, : I am the last Adam?

Posted by Eman and Yasser at 11:15 PM No comments: 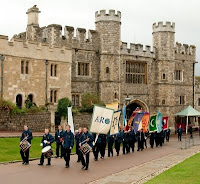 WINDSOR, United Kingdom —Leaders representing the world's major religions, including the Baha'i Faith, gathered yesterday at historic Windsor Castle to formally launch a series of action plans involving their communities in a long-term effort to protect the environment.

"I have long believed that when governments and civil society work toward a common goal, transformational change is possible," said Mr. Ban. "Faiths and religions are a central part of that equation.

"Indeed, the world's faith communities occupy a unique position in discussions on the fate of our planet and the accelerating impacts of climate change," he said.

The core session of the gathering was yesterday's meeting at Windsor Castle, where representatives of each religious group presented a seven-year plan designed to promote "generational change" in attitudes towards the environment.

In general, the plans sought to offer concrete, practical steps for action.

The Muslim plan, for example, calls for the establishment of an umbrella organization, Muslim Associations for Climate Change Action (MACCA), that will represent Islamic nations and faith communities from around the world. It also calls for an Islamic environmental labeling system, a "Green Hajj" so that within 10 years the traditional Islamic pilgrimage will be recognized as environmentally friendly, and the construction of a model "green mosque" to showcase best practices in heating, light, and design.

Representatives of the Baha'i Faith presented a plan that focuses on using a system of regional training institutes to encourage within the worldwide Baha'i community "acts of service related to environmental sustainability." "Baha'is believe that religious belief and spirituality lie at the foundation of human motivation and behavior," said Tahirih Naylor, a Baha'i International Community representative to the United Nations who was one of two Baha'i delegates to the Windsor event.

Posted by Eman and Yasser at 10:30 PM No comments:

Abdu'l-Baha and the Concept of justic

THE CROWDED CARRIAGE
When Abdu‟l-Baha lived in Akka people traveled from city to city by horse-drawn carriage. One day Abdu‟l-Baha wanted to go from Akka to Haifa. He went to take a seat in a regular carriage. The carriage was full of poor people and their belongings. When the driver of the carriage saw Abdu‟l-Baha, he was surprised and wondered why Abdu‟l-Baha had chosen to ride in his inexpensive carriage full of people.
„Surely, Your Excellency would prefer to travel in a private carriage!‟ he exclaimed.
„No,‟ replied Abdu‟l-Baha, and He traveled in the crowded carriage all the way to Haifa.
As He stepped down from the carriage in Haifa a distressed fisher woman came to Him and asked for His help. All day she had caught nothing and now had to return to her hungry family.
Abdu‟l-Baha gave her a good sum of money, turned to the driver and said, „Why should I ride in luxury while so many are starving?‟
Stories give life to past experience. Stories make the events in memory memorable to others and to ourselves. This is one of the reasons why people like to tell stories. ~Roger C. Shank
Posted by Eman and Yasser at 9:16 PM No comments: