The best way to find yourself is to lose yourself in the service of others. M. Gandhi
Service is the rent we pay for being. It is the very purpose of life, and not something you do in
your spare time. Marian Wright Edelman
Service which is rendered without joy helps neither the servant nor the served. But all other
pleasures and possessions pale2 into nothingness before service which is rendered in a spirit
of joy. M. Gandhi
".... Man must work with his fellows. Everyone should have some trade, or art or profession, be he rich or poor, and with this he must serve humanity. This service is acceptable as the highest form of worship." (Abdu'l-Baha)
Posted by Eman and Yasser at 11:14 PM No comments:

Email ThisBlogThis!Share to TwitterShare to FacebookShare to Pinterest
Labels: Faith

New Milestone: Visits to our blog from 100 countries/territories
Thanks to our readers and special thank you to the one who wrote a comment.................
Posted by Eman and Yasser at 8:17 PM No comments:

“As you are aware, Baha'is do not engage in partisan political activities:

“You should take every opportunity to explain to your fellow citizens the fundamental principle of the Faith that strictly prohibits involvement in partisan political activity of any kind, whether local, national or international. Baha'is view government as a system for maintaining the welfare and orderly progress of human society, and obedience to the laws of the land is a distinguishing feature of their beliefs. Iran is dear to the Baha'is, who are the well-wishers of all. In whatever country they reside, including the birthplace of Baha'u'llah, they strive to promote the welfare of society. They are enjoined to work alongside their compatriots in fostering fellowship and unity and in establishing peace and justice. They seek to uphold their own rights, as well as the rights of others, through whatever legal means are available to them, conducting themselves at all times with honesty and integrity. They eschew conflict and dissension. They avoid contest for worldly power. Neither do they aspire to overthrow governments, nor do they participate in the schemings of others to do so. The record of the past one hundred and sixty years bears witness to this assertion. Universal House of Justice, 31 October 2008

Posted by Eman and Yasser at 3:03 PM No comments:

Posted by Eman and Yasser at 8:46 PM No comments: 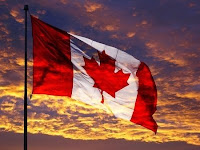 From an email received today:
"An Australian Definition of a Canadian, In case anyone asks you who a Canadian is . . .
A Canadian can be English, or French, or Italian, Irish, German, Spanish, Polish, Russian or Greek. A Canadian can be Mexican, African, Indian, Chinese, Japanese, Korean, Australian, Iranian, Asian, Arab, Pakistani or Afghan.
A Canadian may also be a Cree, Métis, Mohawk, Blackfoot, Sioux, or one of the many other tribes known as native Canadians. A Canadian's religious beliefs range from Christian, Jewish, Buddhist, Muslim, Hindu or none. In fact, there are more Muslims in Canada than in Afghanistan. The key difference is that in Canada they are free to worship as each of them chooses. Whether they have a religion or no religion, each Canadian ultimately answers only to God, not to the government, or to armed thugs claiming to speak for the government and for God.
A Canadian lives in one of the most prosperous lands in the history of the world. The root of that prosperity can be found in the Charter of Rights and Freedoms which recognize the right of each person to the pursuit of happiness.
A Canadian is generous and Canadians have helped out just about every other nation in the world in their time of need, never asking a thing in return. Canadians welcome the best of everything, the best products, the best books, the best music, the best food, the best services and the best minds.
But they also welcome the least - the oppressed, the outcast and the rejected.
These are the people who built Canada. You can try to kill a Canadian if you must as other blood-thirsty tyrants in the world have tried but in doing so you could just be killing a relative or a neighbour. This is because Canadians are not a particular people from a particular place. They are the embodiment of the human spirit of freedom. Everyone who holds to that spirit, everywhere, can be a Canadian."
Posted by Eman and Yasser at 10:41 PM No comments:

Email ThisBlogThis!Share to TwitterShare to FacebookShare to Pinterest
Labels: Canada

Email ThisBlogThis!Share to TwitterShare to FacebookShare to Pinterest
Labels: Islam

“Here it is,” Mr Medvedev said, according to Bloomberg. “You can see it and touch it.” The coin, which was minted in Belgium, was presented to all the G8 leaders attending the summit and bears the words 'unity in diversity.'
http://www.telegraph.co.uk/finance/currency/5796892/Russian-President-Dmitry-Medvedev-pulls-new-world-currency-from-his-pocket.html
الرئيس الروسي ميدفيدف ، وخلال إجتماع الدول الثماني المنعقد في إيطاليا، أخرج من جيبه قطعة معدنية وعرضها على من حوله قائلاً: ها هي، يمكنكم رؤيتها
ولمسها. والجزء الأكثر إثارة في الخبر أن القطعة المعدنية طبع عليها عبارة: الوحدة في التنوع
A world language will either be invented or chosen from among the existing languages and will be taught in the schools of all the federated nations as an auxiliary to their mother tongue. A world script, a world literature, a uniform and universal system of currency, of weights and measures, will simplify and facilitate intercourse and understanding among the nations and races of mankind....(Baha'u'llah 1817 to 1892)
Posted by Eman and Yasser at 11:01 PM No comments:

Posted by Eman and Yasser at 1:25 AM No comments:

Email ThisBlogThis!Share to TwitterShare to FacebookShare to Pinterest
Labels: Baha'is, Love of God

Our sincere condolences to the family of the Muslim lady, Marwa Elsherbini, who was a victim of prejudice and hate crime in Germany few days ago. She was called a terrorist because of her dress and headscarf.........
We believe that prejudice is the cause of the destruction of Humanity.
تعازينا القلبية لأسرة المرحومة الدكتورة مروة الشربينى وندعو للمولى عز وجل أن يشغى النفوس المريضة من داء التعصب الأعمى لأنه مرض مدمر للأنسانية
Posted by Eman and Yasser at 7:44 PM No comments:

Email ThisBlogThis!Share to TwitterShare to FacebookShare to Pinterest
Labels: Justice

19 Facts about Baha’i spies in Iran

We would like to nominate Iran for consideration as the world record holder with respect to the nineteen (19) accomplishments below:

1. Iran is the first country in the world to label over 400,000 followers of the same religions as spies.

2. Iran is the first country in the world where spies are freely and openly going about their lives and the government is not apprehensive about them. However, once in a while, a few of these spies are arrested in order to keep the government militia from boredom; then the spies are interrogated for a few months so that interrogators may gain experience. Sometimes, spies are tortured for the practice of the torturers. Ultimately, a few face firing squads for testing of the guns.

3. Iran is the first country in which spies are born as spies. There is no need for the courts to prove the allegations against them since they are innately convicts from birth. They have no rights; therefore, there is no need to consider their civil rights when bringing charges against them.

4. Iran is the first country where if spies recant their faith and convert to Islam, they are no longer spies, but are consideredsaved.

5. Iran is the first country in which spies, when arrested, have to attend Islamic studies classes – with the aim of their conversion to Islam.

6. Iran is the first country where its spies are secret agents of Britain, Russia, America and Israel, all at the same time. Interestingly, the spies themselves and the leaders of these countries are unaware of such affiliations; only Shariyat-Madari (editor-in-chief of Kayhan, government of Iran backed newspaper) knows.

7. Iran is the first country that has had thousands of spy groups and spy gatherings that have been in contact with the Ministry of Intelligence for the past 25 years.

9. Iran is the first country where spies are not paid. Instead, they spend their own money to tend to the affairs of their community, to eliminate poverty and improve literacy. These activities are the biggest proofs of spying charges against them.

10. Iran is the first country where spies introduce themselves as followers of a religion that the government of Iran equates with espionage. The followers of this religion do not even outwardly hide their convictions to save their own lives.

11. Iran is the first country where spies have established moral and educational courses for their members. Strangely, the government denies them entrance to universities to prevent them from spying in institutions of higher education.

12. Iran is the first country where spies are drafted for two years of obligatory military service. They are even given guns and receive intensive military training.

13. Iran is the first country where spies receive lashes with utmost love; their properties are confiscated with Islamic fairness; they are executed with utmost kindness and Islamic compassion. The government bestows, with utmost friendliness, civil rights specified for spies, in the form of imprisonments, forced free labor, insults and slanders.

14. Iran is the only country in which, there are potentially 40 million spies. Women that ask for the same rights as men are called spies. Men that defend these women are also called spies.

15. Iran is the first country that provides all necessary means for these spies to leave the country and cheers when they have left.

16. Iran is the first country that doesn’t find it necessary to compile documents and evidences to prove espionage charges. Whoever says that he or she is a Baha’i, that person is automatically a spy. Whoever says women are human beings with the same rights as men is a spy. Whoever is engaged in medical research for finding a cure for AIDS is a spy. Whoever establishes an N.G.O. (Non Governmental Organization) for helping children and saving the environment is a spy!

17. Iran is the first country in which at the election time, nobody is labeled spy and all have equal rights and should vote.

18. Iran is the first country in which spies, without any bias and in all fairness, are convicted, sentenced, insulted, and their names publicized by mass media, before they are even tried in courts!

19. Iran is the only country in which Baha’is are not permitted to work in any government office or agency, they hold no position of influence, they have no access to any sensitive or classified document, and they have only opened their little shops and are busy with their businesses, and yet they are still spies!!!

Posted by Eman and Yasser at 6:54 PM No comments: