Question to our readers?

Email ThisBlogThis!Share to TwitterShare to FacebookShare to Pinterest
Labels: Baha'is in Iran

Our eyes filled with tears and joy when we read the following article by Egyptian Muslim who is defending Baha'i rights to live as a normal citizen in his/her own country. http://www.mideastyouth.com/ar/?p=1332&cpage=1#comment-833
Posted by Eman and Yasser at 8:45 PM No comments:

Email ThisBlogThis!Share to TwitterShare to FacebookShare to Pinterest
Labels: Baha'is in Egypt

The Best Way for Mothers to Worship God

"O ye loving mothers, know ye that in God's sight, the best of all ways to worship Him is to educate the children and train them in all the perfections of mankind; and no nobler deed than this can be imagined." (‘Abdu’l-Baha)
Posted by Eman and Yasser at 8:15 PM No comments: 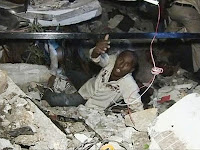 "The Republic of Haiti, with a population of nearly 9 million people, is located on the western part of the island of Hispaniola, sharing a 224 mile border with the Dominican Republic. The terrain includes rugged mountains, rain forests, palm tree lined beaches, and small coastal plains and river valleys. There are several islands, including the famous island of Tortugas (Ile de la Torture) located off the coast of northern Haiti." (hope for Haiti)

PORT-AU-PRINCE (January 16, 2010) - CARE warned Saturday that pregnant women, breastfeeding mothers and young children are at greatest risk in the wake of an earthquake that has devastated the Haitian capital of Port-au-Prince and left nearly three million people in need of assistance. There are an estimated 37,000 pregnant women among the affected population in urgent need of safe drinking water, food and medical care. Half of Haiti's population is younger than 18 years old.

Hospitals and medical centers have been destroyed, and remaining centers are overwhelmed treating people injured from the quake. With limited or no access to health facilities, pregnant women are at an even greater risk of complications and death related to pregnancy and childbirth. Haiti already has the highest rate of maternal mortality in the region: 670 deaths per 100,000 live births.

We believe as Baha'is that all crises are meant to unify the Human race....

"The crisis that exists in the world is not confined to the farmers. Its effects have reached every means of livelihood. The farmers are in a sense better off because they at least have food to eat. But on the whole the crisis is serving a great purpose. It is broadening the outlook of man, teaching him to think internationally, forcing him to take into consideration the welfare of his neighbours if he wishes to improve his own condition. In short it is forcing humanity to appreciate the significance and follow the precepts laid by Bahá'u'lláh. The present and perhaps the near future is dark, but we have the wonderful promises of the Master before us and they shall become true ..." ( Lights of Guidance, p. 130)

"....When such a crisis sweeps over the world no person should hope to remain intact. We belong to an organic unit and when one part of the organism suffers all the rest of the body will feel its consequence. This is in fact the reason why Baha'u'llah calls our attention to the unity of mankind..... " Shoghi Effendi

Posted by Eman and Yasser at 6:49 PM No comments:

Here is a very instructive incident involving the life of Alexander, the great Greek king.
Alexander, after conquering many kingdoms, was returning home. On the way, he fell ill and it took him to his death bed. With death staring him in his face, Alexander realized how his conquests, his great army, his sharp sword and all his wealth were of no consequence.

He now longed to reach home to see his mother’s face and bid her his last adieu. But, he had to accept the fact that his sinking health would not permit him to reach his distant homeland. So, the mighty conqueror lay prostrate and pale, helplessly waiting to breathe his last. He called his generals and said, “I will depart from this world soon, I have three wishes, please carry them out without fail.” With tears flowing down their cheeks, the generals agreed to abide by their king’s last wishes.

At this Alexander took a deep breath and said: “I would like the world to know of the three lessons I have just learnt. I want my physicians to carry my coffin because people should realize that no doctor can really cure any body. They are powerless and cannot save a person from the clutches of death. So let not people take life for granted.

The second wish of strewing gold, silver and other riches on the way to the graveyard is to tell People that not even a fraction of gold will come with me. I spent all my life earning riches but cannot take anything with me. Let people realize that it is a sheer waste of time to chase wealth.

Posted by Eman and Yasser at 11:06 PM No comments:

Baha'is around the World - UK

An octogenarian has received her MBE from the Queen for her services to charity.

Christina Kitchen, 83, was awarded the honour for collecting money over a period of 47 years and serving in Oxfam shops in Epsom and Leatherhead.

Recipients of the honour are usually allowed to take two guests to the ceremony, but Mrs Kitchen wrote and asked for permission to take her four sons, and her request was granted by the Queen. Mrs Kitchen went with her sons to Windsor Castle to collect the award earlier this month.

She said: "I was delighted that my four sons were able to attend the ceremony and witness their mother receive this honour from Her Majesty the Queen". The pensioner was a Biology teacher at Rosebery School and a member of the Bahá’í Faith in Epsom and Ewell, since 1978.

The Bahá’is believe in the importance of integrating with the local community through charitable work.

Posted by Eman and Yasser at 10:27 PM No comments: